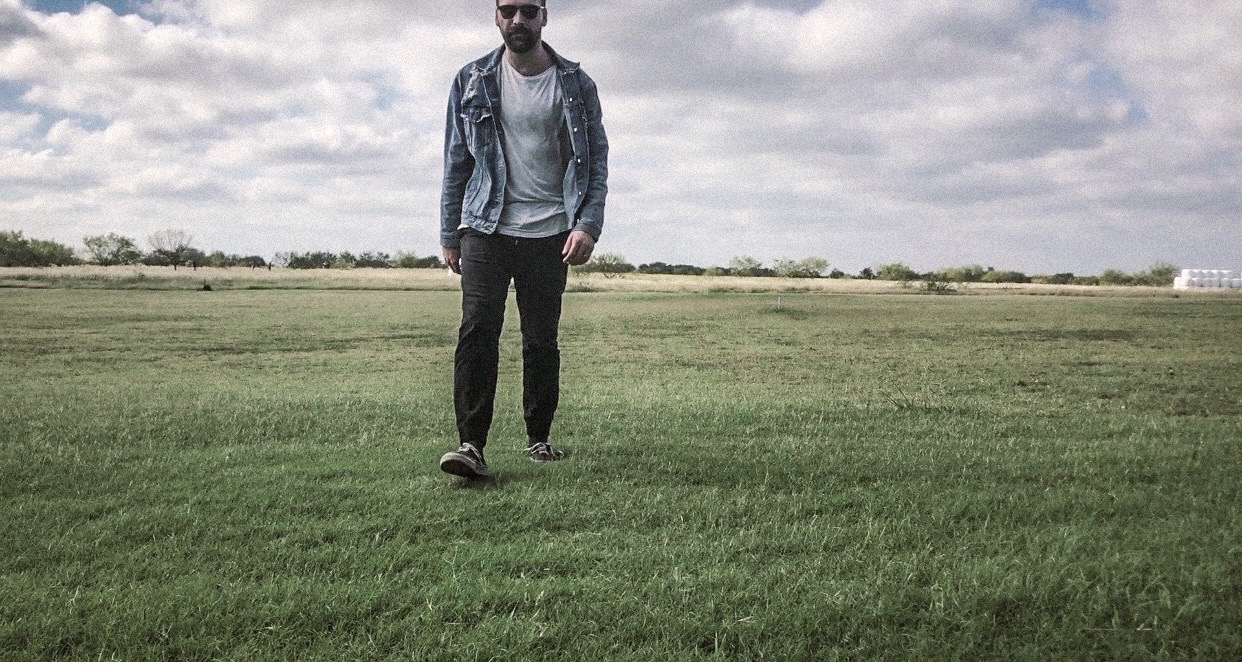 Bareheart is a the new solo-project of Least of These frontman, Tyler Collins. I got the opportunity to talk with him about his musical background, debut EP, the Christian music scene, among other things. Enjoy!

Thanks for doing this, I'm a big fan of your work. For the sake of those who've never heard of you before, could you introduce yourself?

Tyler: Much appreciated, guys! I’m glad you are into my work! So for those of you who don’t know me: Hi. I’m Tyler Collins, aka Bareheart.

How are you doing, in light of the current pandemic? I know it's been rough for musicians since you can't play shows or tours.

Tyler: In light of the pandemic, I’m honestly doing really well. As a musician who’s really just getting started, I haven’t been too affected by the slowing down of the music scene. I’m sure the 5-10 people who would come watch me perform are managing just fine. Haha!

Tyler: I have been singing since I can remember, I started playing guitar when I was 13 because I wanted to be in a band with my older brother, played in a few high school bands growing up (you guys know what I’m talking about here), played in my first actual band called The Captive once I got to college, and then spent the rest of my full band career in a band called Least of These (where my brother has always been our drummer, so it’s amazing how that worked out).

Tell us a little bit about your other band Least of These?

Tyler: Speaking of Least of These, we are (still technically around) an aggressive indie band from Dallas, TX. We started in Denton, TX back in 2011, and have put out 4 records over the years: More Than Conquerors (EP), Change Will Come, Mere Image, and Wolves (EP). I took a break from 2016-2019 to work on some things that I’ll get into later. We are in the process of working on new music, so stay tuned for that!

Why did you decide to go a different route musically, with your new project Bareheart and what were some of your influences?

Tyler: Bareheart has really always been a musical desire of mine; I just never had the name. I’ve written various acoustic songs over the years, largely inspired by City & Colour ever since I first heard of him back in 2005. I’ve since picked up a few tricks from Noah Gundersen, Dustin Kensrue, and Penny & Sparrow and incorporated some elements from them into my current writing styles of Bareheart.

The biography of Bareheart states, “Bareheart started as a vision, a challenge, and a conviction to bare his heart, in the thicket of tragedy.” Could you expound on this?

Tyler: My mom always told me that I wear my heart on my sleeves. I’ve never really been afraid to bare my burdens for others to see. I’ve also paid the price for that on numerous occasions as well: one of those instances being my marriage that fell apart in 2018. I had hung up my desires for music to focus on my marriage (why I initially left Least of These), but when everything started crashing down in October of 2017, God gave me “Rain”, one of the songs on my EP. From there, music was put back into my life and I believe it to be for the purposes of sharing my heart.

As a follow-up to that, why did you choose the name "Bareheart" over your real name?

Tyler: I was walking around the grounds at Audiofeed last summer after playing the impromptu stage and I was thinking about how vulnerable and kind of uncomfortable it was. I thought, “Dang. I just bore my heart out to maybe 50 people or so. OH! Bore my heart. Bare my heart... BAREHEART! Dibs!” Seriously. Just like that.

What was your creative process like for your new EP, "In the Mo(u)rning?

Tyler: I had a whole lot of emotions swirling around during that very difficult time of my life. I honestly wrote maybe 15 or 16 songs from October 2017-June 2018. I recorded “In The Mo(u)rning” in July 2018. The songs I chose for the EP were the ones I felt helped tell my story in an honest yet raw and emotional way.

What's the meaning behind the song "Rain"?

Tyler: I actually wrote “Rain” one week before my wife kicked me out of our apartment and began the end of our marriage. When I wrote it, I had no idea what I was writing or why. The lyrics didn’t make sense to me. Things were fine at the time. Eventually, it all made sense once my marriage started to end.

Considering the theme of the EP, how was it like releasing it publicly?

Tyler: I have been so excited to finally release the EP! I love knowing that it has the potential to encourage anyone who finds it! A little uncomfortable at times when I get stuck in my head about if that will actually happen, but that’s the nature of releasing music. You really never know if it’s going to pop or flop.

What do you usually listen to on the road, traveling between shows?

Tyler: Oi! What a question! It really all depends on my mood. My favorites are As Cities Burn, Thrice, City & Colour, Between the Buried & Me, Copeland, Mae, Acceptance, The Contortionist, Miles Davis, Thelonius Monk, Underoath, Emery, Kendrick Lamar, Logic, J. Cole, and so on. Almost anything other than country music, with the exception of Chris Stapleton.

If you could collaborate with one artist who would you pick and why?

Tyler: My gut answer has always been Dallas Green, but I’m gonna call an audible. I’d love to collaborate with Hayley Williams from Paramore. I would just love to hear what our voices would sound like when they’re paired together! (Ps, if you can make this happen, that’d be SICK!)

**The Christian music scene is known for chewing up artists, and spitting them out, so to speak. Many musicians end up, "falling away” the longer they stay in the scene. Why do you think the scene is so hard on believers? How do you stay grounded in your faith? **

Tyler: I think the Christian music scene is so difficult on musicians because The Christian music industry is first and foremost a business. We come in wide-eyed and bushy-tailed, hoping we’ll make the right connection with someone who will care for our music and our heart as much as we do, but that’s not always going to be the case. Most of us don’t want to turn our art into a business; we want to keep it “pure”, the way we wrote it. That doesn’t usually fit the business model. I think that in order to really keep your values intact with your art as a Christian musician, it’s a matter of who you know and if they care enough.

As a follow-up, what advice would you give to other Christians?

Tyler: My advice to my fellow Christian musicians would be stay honest, stay real, don’t let business become your belief, and let whatever happens happen. If 1 person has been moved by your art, then it has been worth it. Forever let that be enough.

I recently learned you desire to attend seminary, how was this desire born? Is it something you've always wanted to do?

Tyler: I’ve had a heart for ministry ever since I was a kid. I became a Christian when I was 7 and I grew up in the church. Seminary was talked about a lot in those circles. When I learned how to play the guitar, I almost immediately started leading worship for my youth group. My youth pastor once pointed out to me that some of my fellow youth kids would trust me with hurts and questions. He called me one of the leaders. He trusted me with that role. I love to help and serve however I can. It’s a large part of who I am.

What area of ministry do you want to specialize in?

Tyler: I really don’t know what area I’d specialize in if ever presented with the opportunity. I used to think Youth Pastor, Counselor, Worship Pastor, but I really don’t know. That’s not really clear right now. I’m okay with that though. I’m doing what I believe I should be doing right now and I also believe that my ministry path will become clear in time.

There's been a recent debate over whether streaming platforms are killing the music industry, what are your thoughts on this issue?

Tyler: This is a tough topic. I’m really not sure what all I think as far as streaming services killing the music industry entirely. However, I DEFINITELY believe that artists aren’t receiving near as much compensation for our art. When you have streaming CEOs making billions while paying artists pennies only after a certain amount of plays, it becomes challenging for most of us to keep going. The equipment, the merchandise costs, the recording costs, touring, etc, none of that is cheap. If we aren’t getting paid while our songs are getting played, we’re only going to receive a failing grade.

What's next for Bareheart and where can your music be found?

Tyler: What’s next for Bareheart is the second half of the story; the second EP to coincide with the first, “In The Mo(u)rning”, which you can find anywhere that you can stream music (the necessary evil)! You can also find my music video for “Rain” on YouTube.

Thanks for taking the time to do this interview, any last words?

Tyler: Thank YOU for caring enough to ask me such intentional and thought-provoking questions! This right here is the stuff that matters and this right here is what helps make the work worth it. However far Bareheart goes, it will only be because people like you heard my songs and believed in them. Thank you so much! You guys RULE!!