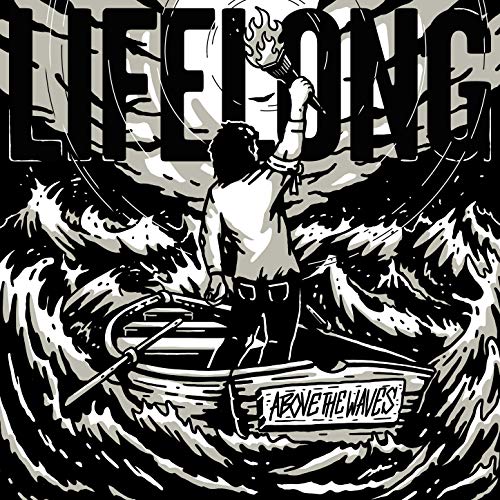 Album: Above the Waves (Full-length)

I came to Lifelong late. They released their debut EP Revive the Masses back in 2018 but it was only over the past few months that I took the time to give it a listen. I enjoyed what I heard and was very excited to learn that a full length was on its way! Well, here we are Lifelong’s debut full length Above the Waves released on Solid State Records. Boy, is there a lot to say.

Lifelong is a two-man group comprising Trevor Vickers and Joel Piper, both formerly of Confide, though in all honesty if you were a fan of that band back in the day (and I only listened to them after hearing Lifelong so I wasn’t) this is a very different band and a completely different style altogether. While the former was a metalcore band this here is a melodic hardcore band that liberally throws in a lot of pop-punk influence. One of the first things that are very evident as soon as the first song starts (or when I heard the first single) is that Ross Kenyon, the screamer on the ep, is gone. I’m not in the loop and have no idea what happened. It’s jarring at first if you were a fan of the ep and took me some time to get past. Once past that these vocalists shine. That’s right, vocalist plural. I’m a complete mark for dual vocalist bands. We get an interesting mix of hardcore vocals with a pop-punk style, though those parts are sung with so much conviction that he often sounds like he’s straining to get the words out. Listen to the song Iron Gates to get an idea of what I mean. I’ve been struggling over several listens to figure out who the punk vocals remind me of, and strangely it hit me on my most recent listen, particularly on Black Friday, that I hear a lot of Saosin here. Lots of passion, but with a catchiness to it. Musically this is very drum-driven, they are right upfront in the mix and Joel sets a fast pace. This album deviates from a typical punkish melodic hardcore style in that it deftly interweaves a lot of poppy beats, leaning on the pop-punk influence. The first single Above the Waves typifies this with its fun intro and has a chorus that has been stuck in my head for a couple of days. They still bring the heavy, though, throwing in some breakdowns and sprinkling in some gang vocals. I can’t listen to the end of Attention without envisioning a giant pile up in front of the stage screaming along. My one complaint is that I want more of the breakdowns and heavy sing-along parts. They often build up tension, drop in the heavy part, and then almost immediately transition to the punk sound. It works for them and shows a great technical proficiency, but wish they’d lean into the heavy.

I, unfortunately, don’t have a copy of the lyrics and cannot delve as deeply into them as I would have liked. That being said this style of hardcore makes it fairly easy to pick out most of the themes by just listening along. For the most part Lifelong wants to be a positive and uplifting band. They mix what I consider a fairly typical stand firm through the tough times with a very blunt God is our hope message. Above the Waves asks that we hang on and know that through the turmoil God will see us through. Attention hits us with a song about how difficult it is to communicate with others, particularly God, and has one of my favorite lyrics of the album “sometimes I feel the quiet like it carries its weight” One of the most interesting themes that Lifelong uses is the subversion of the stay true to yourself trope of this style of music. With lines like “With freedom now, I’m choosing to bend the knee, I’m not going to give in unless it’s to you” from No Regrets there is a very important acknowledgment of just how much we need Jesus and how we need to rely on his strength above our own.

Lifelong’s Above the Waves is a fantastic album. It marries hardcore and pop-punk freshly and excitingly while being the positive and uplifting album I truly believe we need right now. It boldly asks us to look above where our help comes from.