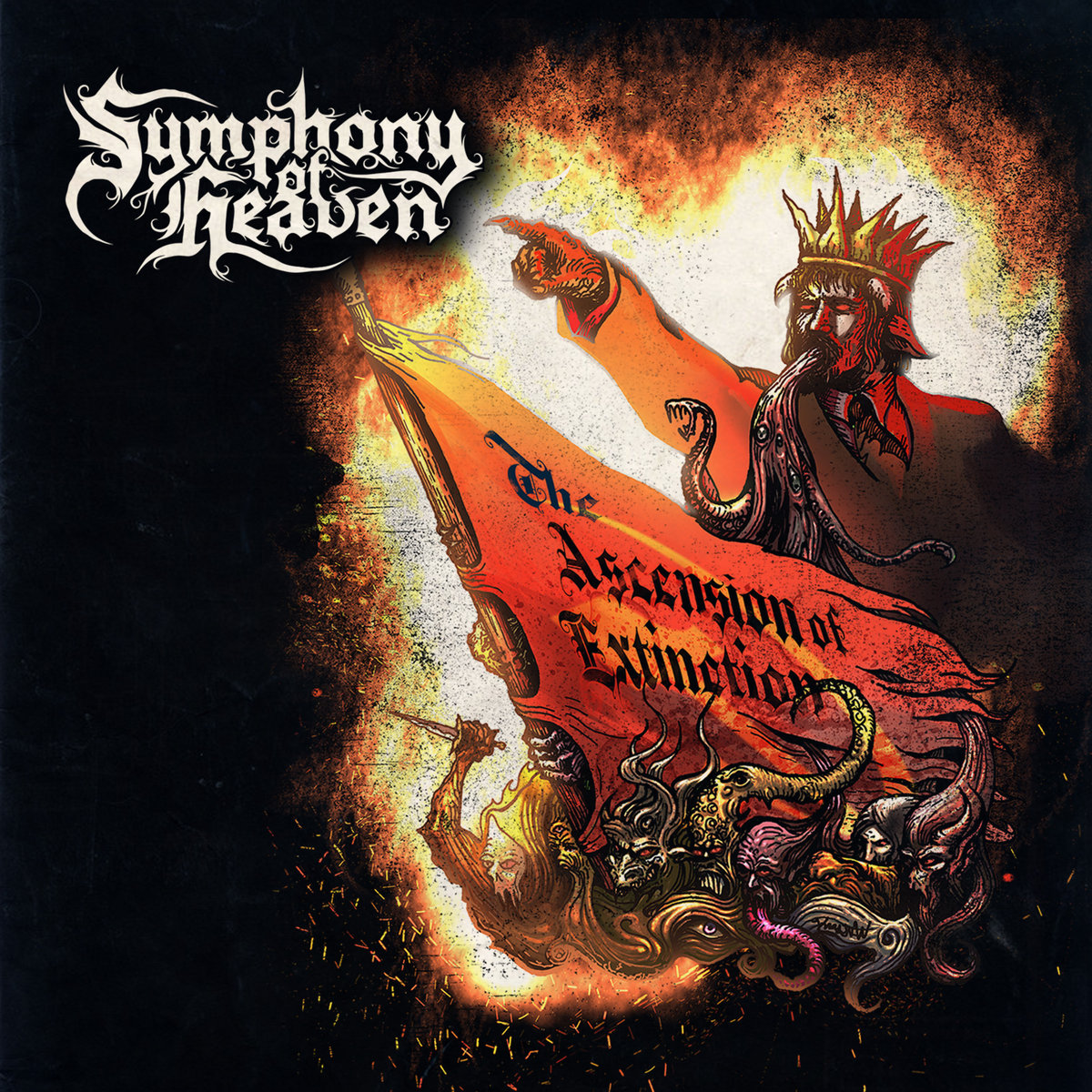 EP: The Ascension Of Extinction

Symphony of Heaven is a relatively new Christian Melodic Blackened Death Metal band from southern Indiana.  The band formed in 2017 with their first EP “…OF SCARS AND SOIL…”, which created many beloved fans instantly with their intense, yet atmospheric songs inspired by the Book of Job.  In addition to their first EP, Symphony of Heaven has also released one full-length album “The Season of Death” as well the EP “The Body of Christ”.  Their latest EP “The Ascension Of Extinction” will be the band’s third EP in the making.

Lyrically: While some Christian bands and songwriters may try to sugarcoat and soften the Truth as to try not to offend anyone, Symphony of Heaven is not one of these bands.  They are not afraid to speak the truth plainly and bluntly.  The songs have a common theme of humanity’s fallen nature and how we as humans try to be “as Gods” but are inevitably evil and will one day fall to “extinction” if we do not know God as our Savior.  Their boldness in their lyrics is encouraging and inspiring to me as a Christian.  I also thought it was interesting how some of the lyrics were written by PATHOS and Karl of Pantokrator (opens new window).

Sonically:  There are many aspects of Symphony of Heaven’s songs that many extreme metalheads will enjoy.  The low range guitar tunings along with intense death growls and high pitch screams bring much intensity to the ears.  But what Symphony of Heaven mastered was merging the melodic melodies and atmospheric elements along with their intensity.  One can tell after listening to their songs that they spent a lot of time perfecting their sound to something that is both raw yet beautiful.  As I listened to their songs, one of the things I admired a lot was their use of harmonic screams to strengthen their already harsh death growls and screams.  Another thing I admired was the use of narrative clean vocals and choir background vocals in the song “DeathMarch”, it really brought a great atmosphere to the song.

Final Thoughts: Overall, I really enjoyed listening to Symphony of Heaven’s new EP.  I am impressed by their God-given musical talents and songwriting abilities.  Their usage of growls, screams, narratives, and harmonies was incorporated very well.  I look forward to what Symphony of Heaven will produce in the years to come.

Symphony of Heaven is a blackened death metal band from the USA. The members are involved in several other projects like Renascent (opens new window), Timōrātus. (opens new window) Rottweiler Records (opens new window) has picked up this band recently, and so here we have the EP called The Ascension of Extinction.
The album starts with You Shall Be As Gods, a very great song it has a kind of black and roll vibe. In the middle of the song, we have a moment of spoken words a nice addition to the song it brings some extra atmosphere.

The second song(the title track) starts as if it’s a Skald in Veum (opens new window) song. Maybe I am wrong, but it sounds like their vocalist is a guest on this song? A nice combination of both black and death metal influences throughout this song. The second part of this song is absolutely beautiful, and it reminds me of Pantokrator. We already had two quality songs. You can hear the experience of the band members. The instrumentation is top-notch.
The third song is called Death March, this track has a slower tempo, and it contains some amazing low death metal vocals. The variation is a very strong point on this EP. The final song on this album Mountain of Man's Ignorance makes me happy right from the start, an amazing riff, in the beginning, it gallops so nicely. This is the most melodic death sounding metal song on this EP.

I had the privilege to read the lyrics already and I am pretty impressed with the deep and dark lyrics. Karl from the band Pantokrator (one of my favorite bands) has also written some lyrics on this EP. The overall message is something like a warning. When you walk in the darkness, you will fall like Babylon fell. The evil behavior of mankind does not remain hidden. And a path of selfishness leads to eternal death. But that’s not the case when you will seek the Light.

Many people will look forward to a full-length release. Can we expect some duration between the 50 and 60 minutes of this epicness?