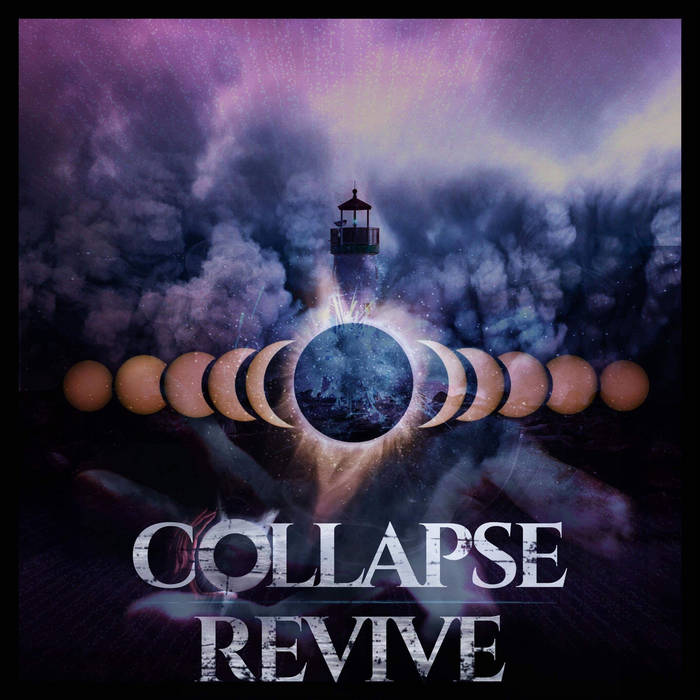 Collapse//Revive is a Christian metalcore band with progressive and melodic influences. They started the band with the vision of making well-written songs; lyrically and sonically. And I honestly think these guys accomplished that. They offer a great musical experience, with great elaborated riffs and beats, with great variations from the common metalcore band. Yes, I love metalcore, but there are so many bands it gets repetitive sometimes, and I think this band solves this problem, in bringing great innovations to the metalcore scene.

This EP performs a perfect balance of heaviness. It has great slow and sort of ambient fragments, creating a good atmosphere that allows you to get in the mood and the style they want to take you in, and they break it down with beautifully executed and djenty progressive riffs that will make you headband for sure. They have an awesome sense of song composition and construction of the song's structures. You have well-executed clean vocals, in which you can viscerally feel the emotions and the faith of the vocalist in his voice.

One of the biggest innovations of this EP was the use of vocal techniques borrowed from deathcore and other extreme genres. Taking the average metalcore sound to another level. I know some people aren’t used to this kind of vocals, and maybe won’t get them or could think “This is not metalcore”, but in my opinion, metalcore needs bands like Collapse//Revive that take the brave step to new musical possibilities. The vocalist, Daniel Keebler is really talented to perform all this variety of growls, high screams, and even some pig squeals (which I find not only good but revolutionary to the metalcore scene).

The album starts with Doxology in a very poetic way with some spoken screams that glorify God and exalts his majesty and then the riffs get harder. I loved the fact that you couldn’t tell what was coming next. They were so unpredictable it makes every song awesome and full of surprises, which is actually what I expect from a progressive band. Breakdown after awesome breakdown, with great riffs, and awesome catchy drum beats, crowned by a BRUTAL pig squeal. These lyrics are actual poetry to me “All Consuming Fire Burn”, deep and beautiful, asking the Lord for strength to fight, and humbling themselves before Him. I couldn’t feel more represented by the lyrics of this album. Passover starts with a calm rhythm and builds up pretty heavy, I have to say this was my favorite track from the entire album. Powerful lyrics I can sing along to praise God, with all of my lungs. The clean vocals weren’t perfect, but the strength and emotion on them make them mind-blowing to me.

Antichrist came with a different sound from the first two tracks, keeping the album fresh, with awesome melodies and riffs that are pretty sticky and memorable. With pretty biblical lyrics against the enemy. I think those were tunnel throated highs (I’m not sure of which vocal technique they were), and they gave the song a different level of brutality. XL: III starts intense and energetic. Probably the most characteristic song from Collapse//Revive, because it reflects aggressive the style of the whole album on it. Once again, the lyrics are beautiful and they're based on Psalms 40: 3. Panic is another groundbreaking sound, with powerful sound, with lyrics which I’ve seen many people get identified, because they talk about anxiety and panic attacks. I guess this song has to mean a lot for a person who suffers from anxiety. And that breakdown, in the end, will make your brain melt away. I love the transition between panic and abomination, it feels very fluid. Abomination was the best way to close the EP with carefully written and powerful lyrics just read “But I will worship the King of all kings, for he deserves my everything” and the intensity of when Daniel sings; “HEAR THE SOUND OF THE LION OF JUDAH” is devastating, hell must fear this breakdown. I genuinely think drums were about to explode when they recorded this album.

The only critic I could add is that I would have liked a better pronunciation at some points, but these are brutal growls and I understand it is hard to get a good pronunciation on some words.

I couldn't feel more represented by the lyrics of this album. They talk about anxiety, about feeling trapped in sin, and asking God's strength to do the things correctly and proclaim His name, the battle is hard, but with God on our side, we're victorious. I can see they know that we all have to Collapse first so he can Revive us. Beautiful, openly Christian lyrics.

One of my favorite records of 2019, with a unique and distinguishable sound. I hope these guys receive the attention they deserve. I would recommend this band to metalcore fans and also people who aren’t really into metalcore, because it is a great start point to show how talented are the artist in the metalcore scene.

I'm looking forward to what this band can do next, they have a great music future coming. So much potential.