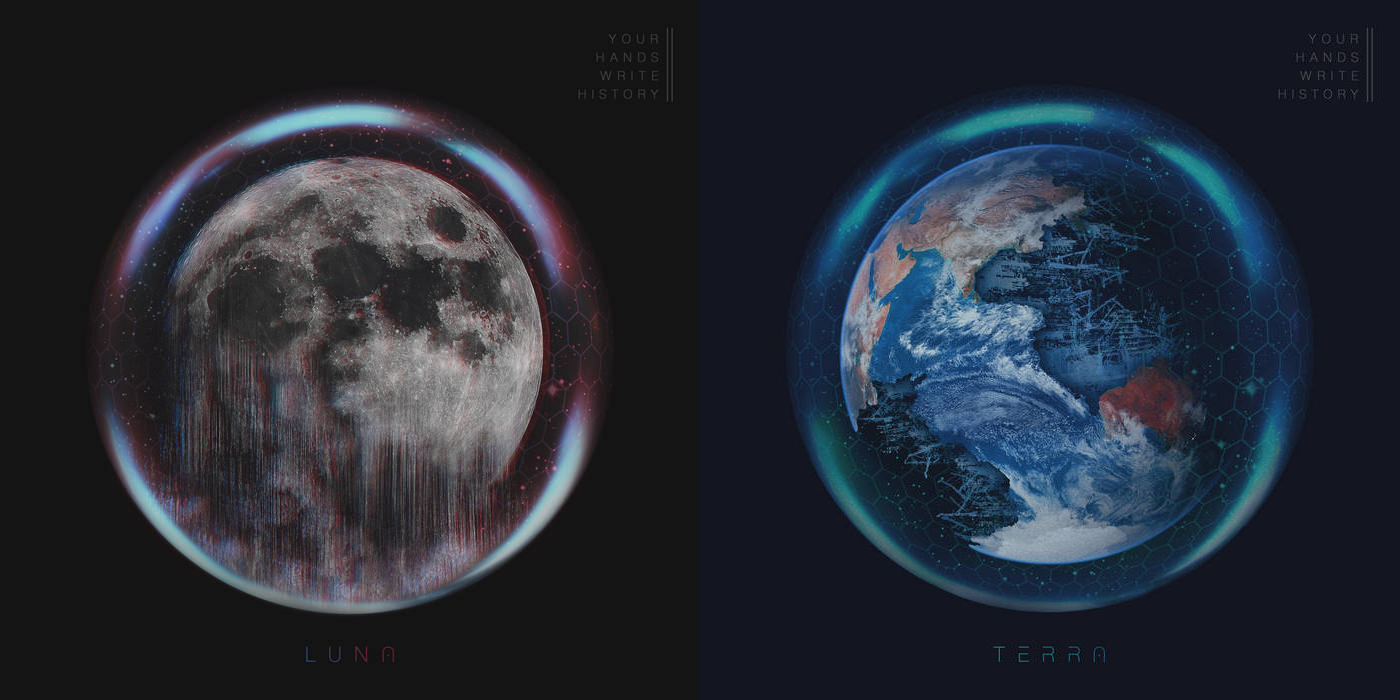 One should never have their first experience with a band in the middle of the night when you should have gone to bed already. This was my introduction to Your Hands Write History, or YHWH for short (oh, I see what you did there!). This is a band that is way too complex and nuanced to be appreciated in that kind of state. Imagine if you took the vocals of Garret (Silent Planet) and/or Micah (Oh Sleeper) and put them over top of a combination of Periphery and The Contortionist (early couple, particularly their second album). (For the sake of honesty, some of those comparisons came to me, while some I took from the band’s tags on their Bandcamp page).

I am going to review their two eps, Luna and Terra. They are two parts of what the band calls The Solar Paradigm Triunity, with the third still to be released. I will not combine the two into one cohesive review despite them being two parts of a greater concept piece but will keep both together in this review since they are each only four songs.

L U N A starts with the song Luna (yup that’s a weird sentence). It’s a slow, mellow intro that at first seems to be an instrumental. About mid-way through the song, there is a subtle shift in the tone and tension builds. There are brief vocals that comprise soft singing that matches the mellowness of the rest of the song. There is no real break between this and Gravity’s Pale Hand (this is going to be a calling card for these albums). There’s a transition from the slow melodic into a heavier rock that then moves to an even heavier metalcore sound. Throughout the song, they transition back and forth between these two sounds. The vocals predominately clean, but they are raw and jagged that easily lends to flowing into the screamed portions. The song drops into an aggressive breakdown in the middle of the song and then slows down for a spoken word piece that sounds a great deal like Levi the Poet. I still keep searching to see if he has a guest spot here, but it doesn’t seem to be the case. Eventually, it uses a very spacey vibe to transition into the next song, Wandering Stars. This song wastes little time turning into a metalcore song, albeit one layered over a steady djent sound. It may be a matter of preference, but the cleans that start here and continue through to the next ep are kind of jarring. They feel kind of off somehow, but it suits the songs and style so well that they quickly stop being troublesome. The screamers crazy range takes shape here. An ability to go from higher pitch screams to mid-range growls to serious low-end gutturals is incredible. Vortex Veins is a full-on blender of crazy. It takes the previous and speeds up changes tempos, and stops and starts on a dime. It even has parts that make me think of some old school screamo songs. And I haven’t even mentioned the jazzy bass riff about two minutes in.

Lyrically, L U N A paints a vivid portrait of our spiritual journey. They use a space and heavenly bodies metaphor to help tell the story. We start with Luna and our creation, which almost immediately turns to an acknowledgment of our failings that has us falling into darkness. God appears in Gravity’s Pale hand, answering the song’s lament on being in the aforementioned darkness by asking us to persist in a forward journey into (and presumably through) the void. Wandering Stars looks at the pitfalls that wait: “We pursue flux progression, exalting hollow inventions of our finite projections to moderate with distraction”. Eventually asking us to come together in unity, to seek after God’s guidance. Um… so yeah… Vortex Veins is a song on this album. There is so much going on here; it matches the craziness of the music itself. From what I could piece together it’s a lament of how much damage we are doing with our disunity, selfishness (re sinfulness), and how we need to come together and get our selves straightened out. I think.

Luna is a great kick-off to this set of eps. It establishes everything the band can do while maintaining a constant underlying flow. The music often circles back on itself, never letting you forget where it has come from but maintains a tension that continues to build throughout the four songs. It’s a tension I’m not sure ever really breaks either.

To start, T E R R A is a very different album. It’s still four songs and ties into L U N A, but it is thematically different. Terra, the first song, starts slow and spacey but takes much less time getting to the singing and quickening the pace. I’d need to give the song eps a few more combined listens, but I wonder if this song serves to give us the break in tension that  L U N A built. Orphaned Star wastes no time. It jumps right into the aggressive heaviness that Terra built up to. At times it continues the craziness of Vortex Veins. They get creative with the vocals here, having the screamer change styles within the same sentence and even changing vocal inflection from word to word. There’s a very emotional part roughly three-quarters of the way through where the music almost completely drops out and the singer screams his lines. The music then builds back up, as he gets more and more intense. Collapse of the Red Giant continues the relentless pace, yet finds the time to introduce yet another vocal style. Adding in an almost deathcore? scream. I again searched out liner notes to see if there is a guest here, again to no avail. Nova Souls changes things up a bit by incorporating the clean vocalist much more predominately. He was there on Orphaned Star, but he takes a lot of the shine on this song. There is a grinding breakdown that you would think they were going to end on, except they don’t and they slow it down again, only to climax with an almost Matrix sounding chaos. And then it’s over, and you feel you can breathe again. I realize I’ve spent less time on the music this time, but honestly, they do much the same here as on the first EP, a steady djenty sound with metalcore overtop. The difference is that L U N A was a little slower with a bit more atmosphere while T E R R A just goes for it with the heaviness.

Lyrically, T E R R A starts us off pretty much where we left off. There’s a pleasant poem that talks of waking up to God’s presence; “I woke, your familiar fingers interlaced with my own”. Orphaned Star and Collapse of the Red Giant are where we deviate from the overall story. Instead of talking in generalities as on L U N A, these two songs deal with very specific issues. The first is a song about a girl who has suffered abuse at the hands of her father. It’s God promising to rebuild what has been torn apart and to see value in herself despite all that has happened. The song eventually shifts to God speaking his wrath upon her transgressor. This second part while seemingly harsh does theologically underscore the fact that we believe in a God of Love and Justice, the latter of those often being neglected. Collapse of the Red Star is tougher to parse. It appears to be primarily about how the government (specifically the USA) has become heartless and fixated on money and power. There is also a sense of concern about how this affects the church (believers as a unity). I’d go so far as to say it’s a call for the church to step away from being so entwined in politics, but that may be my bias showing. Nova Souls wraps us up with the most ridiculously wordy song I’ve ever seen, and a great many of those have so many syllables I thought I was reading a theology textbook. It mixes a heavy dose of the space metaphor with the importance of remembering that we were designed, created, and loved by a Divine Being. It does an amazing job of putting into words the need for us to, accept that there is a mystery in God’s working and we need to find a way to live with that. I’ll leave off the lyrical discussion with a quote from the song; “Seek the truth with wisdom and surely you will find evidence of our Creator’s design. Our confusion is merely the anomaly between an infinite being and our limited minds”.

While I prefer T E R R A to  L U N A, it is a little more disjointed. L U N A had a much tighter theme, and the songs flowed more obviously to one another. With T E R R A the topics of the songs are still themed, they go from the grand sweeping vision to a more down to earth (T E R R A) specificity.

What more is there to say about this masterpiece of a two-part set? YHWH have taken their influences and blended them to produce a sound that both honors and stretches what came before. Adding to it a set of lyrics that equally embraces a poetical journey through space with a deep theological look at our Spiritual journey.