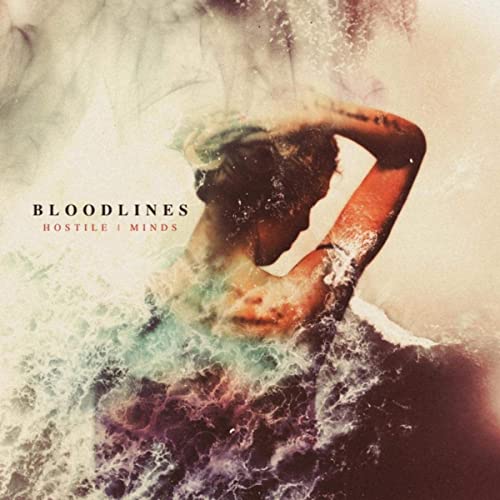 Do you like Deathcore? How about some Metalcore? You want some heavy breakdowns and a lot of chugs, maybe even a little bit of singing for flavor? How about some Nu Metal (yup we are making a trip back to the late 90s/early 00s)? When I first heard Bloodlines I was expecting some straightforward deathcore. The first song I sampled even seemed to play right into that assumption. Upon listening to the whole album, I felt pretty disappointed. I just wasn’t hearing what I expected. Sitting down to really give it a listen (most of the time music is a bit of background noise for me) I’ve figured out what threw me off and have come to far better appreciate just what Bloodlines brings to the table.

So to start the review, I wouldn’t categorize what Bloodlines does as Deathcore. Yes, they do bring that influence to the table, but I believe that it makes more sense to classify them as a Metalcore Nu Metal fusion band. We start the album off with Esh and New Age; both songs bring the heavy chugs of a slower deathcore style. No crazy high to low vocal changes, pig squeals, or inhaled vocals that you would hear from a deathcore band, but instead using a steady passion-filled metalcore vocal. We start to get some industrial type effects to mix in a bit of atmosphere, but all in all the two songs are a bit generic, albeit really well down. I was left feeling like this was going to get boring quickly. Wrath drops and the band really begin to embrace the Nu-metal. They start to play around vocally with an interesting robotic voiceover that reminds me of rap fill in parts. They also have a fun call and response through the chorus. Babylon hits and we just jump right into the rap cadence vocal styling. The genre fusion is in full effect. Then the clean vocals take center stage on End of Days, and I’m fully on board. Now, normally I tolerate cleans with an understanding that they set the contrast that gives greater emphasis to the screams. Here though the cleans are front and center and really serve to set the tone of the song. These aren’t the higher pitch sad emo cleans, but a deeper more morose sound that pairs really well with the screams when they come together throughout the song. I can’t emphasize enough how well the cleans work here. At this point, I have to admit my knowledge or rap is limited, but I wonder if Disconnect isn’t an early example of the mixing of metalcore with trap-style rap? The blending works well and helps reset the tone of the album after the previous slower song.

They’ve done so much to experiment with different sounds and vocals at this point that it doesn’t become a problem when Had Enough slips back into the deathcore/metalcore formula of the first two songs. This is a band that knows its strengths, when to experiment and when to settle back and return to their roots. Hostile Minds gives an instrumental that as with almost all instrumentals leaves me wondering why we needed it. Lineage and Spiritual Warfare leaves off with a pairing of two vastly different styles. The former sounds like it could have been Breaker era For Today song, while the latter brings us a radio-friendly (albeit it a heavier rock radio) closer. They do a good job of blending everything they are doing and experimenting with and giving us a cohesive listen. I do question the instrumental and wish that they used more of the industrial sounds and occasional turntable scratching. Almost every time they throw it in I’m left wanting more. The other gripe I have with the album is the songs tend to end oddly. Wrath has a quiet part then they burst back with an amazing breakdown, but the breakdown doesn’t flow from the song at all. Babylon ends with a Latin prayer that seems to come out of nowhere and a few of the other songs just seem to trail off (I admit that I may be nitpicking, but it just jumps out at me).

Lyrically, Bloodlines pulls no punches and doesn’t try to be poetically metaphorical. They say exactly what they are here to convey. From screaming “Holy Spirit fill me with your Presence” in the early parts of Esh to “With Jesus blood I have my victory” in Lineage, their faith is on full display. The songs grouped into three themes, starting with tracks 1-4 setting up the foundations of faith and the struggles that lead to. Tracks 5 and 6 explore a bit of questioning and some of the doubts that can arise from the struggles. The title of track 7, Had Enough, succinctly puts those fears and doubts to rest while Lineage plants the flag of faith firmly and serves as a battle cry to follow Jesus to victory. Again I can’t really understand the placement of the instrumental between 7 and 9. I also am not sure why the album ends off with Spiritual Warfare. It’s another song of the hardships of faith, and while a great sounding song, seemingly would have fit better around the middle of the album to end the album on a higher note.

Hostile Minds is a good first album. The band does everything well and clearly, lays out the gospel, persecution because of it as well as the ultimate victory in Jesus. They could use some fine-tuning, but I am excited to see where they go with their next release (which is not far off as I write this!!).