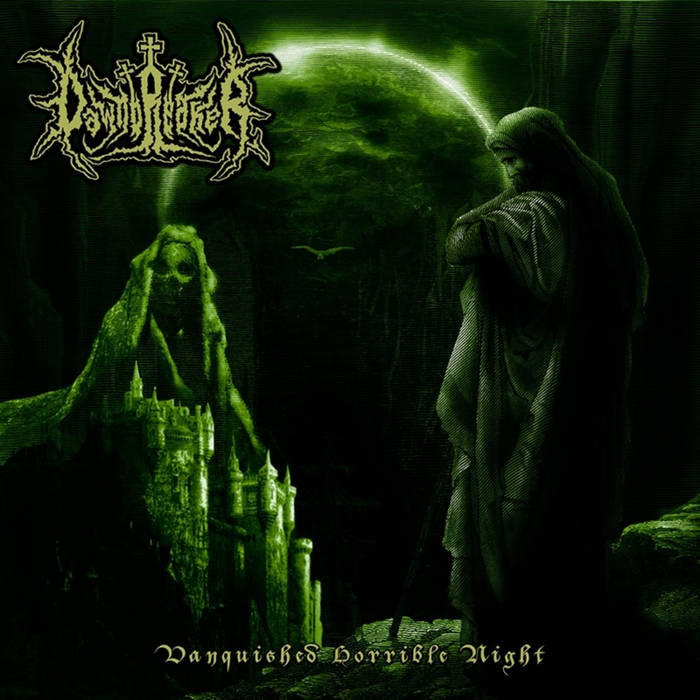 Dawnbreaker is a black metal project from the USA. Fans of bands like Antestor, Crimson Moonlight, and another band that comes to mind is Shadows of Paragon (because of the rawness and vocal similarities) will thoroughly enjoy this record.  Above all Cullen Toner knows how to create his own sound, and he is inspired by a number of prominent Christian black metal bands. Pretty awesome I must say. Vanquished Horrible Night is the third release by Dawnbreaker.

The album starts with a majestic entrance called Summoned by Christ’s Vicar. Then the first song is Evil’s Bane starts off, and I must say I am pretty impressed, the sound is a little bit different than the previous release, the melodic influences are much more evident, in the riffs but also in the keyboard / orchestral section, and at the end of this song we here some of the best clean vocals I heard in Christian extreme metal for a while, it sounds very haunting. The Virtuous Quest is the next track, this track has a striking start, interesting guitar sounds that soon turn into a wall of melodic black metal violence, Cullen also manages to create some pretty icy screams, the chorus sounds in the middle part give it an even more majestic sound.

Bridge Between Worlds was the first single I have heard from the new album, it contains all the ingredients that we are now used to from Cullen. Pretty good track.

Torment of Anti-Christian Souls is the shortest track on the album, but what a furious song this is, just epic! The furiousness of this song is amazing.

The lyrics of this track are a great fit. It is a warning but at the same time a hand extending to the people who turn their backs on God, why will you suffer eternal pain, Jesus knows you like no other.

You may already be used to this from me but I will not discuss every track. For my favorite track from the album, Yours is the Night I would like to highlight something. the variations in this track are really great, the alternation between fury and melodic passages are a perfect fit in this track. A Martyr’s Glory, Lady of the Snows, and the Outer Darkness continuing on the path that has been taken, The Outer Darkness is a kind of soundtrack to end the album

Overall this is a quality release, great to see some new Christian bands and artists who are playing an extreme genre. I know it’s about personal taste, but I very much like this new approach to giving the music a more melodic black metal feeling, the vocals and riffs are sounding better than before.

Reason: There is still plenty of room for improvement. I would like to add that I am sure the quality will increase in every album. Cullen is a very talented guy.

As a new release by a well-established artist (Cullen Toner), this album builds on previous symphonic metal releases. Personally, I feel this album is better balanced than the previous albums Dues Vult and Total Depravity. Vanquished Horrible Night carries through a strong Christian narrative with the speed and heaviness characteristic of black metal.

Lyrically, the album is solid in biblical foundations. The album centers around a quest carried out by an unnamed protagonist. Summoned by Christ’s Vicar, our character is called to ‘wage total warfare in the spiritual’ and to bring light to the plague cursing humanity. The album continues to explore how this might play out, with a heavy reliance on taking strength from Christ and stripping back of earthly dependence. There is an implication of Roman Catholic ideals (supported by the holy war concept), although this isn’t obvious until the second last song, Lady of the Snows, in which we meet the mother of ‘the King’. In terms of the narrative, this song doesn’t quite fit with the previous exploration of faith; the direct referencing takes away from the allusion built.

Sonically, the album flows well. Opening with an instrumental builds the scene and sets the tone. I would question the repetitive use of horses hooves in the opening sequence - the underlying repetition brings down the otherwise skillful tonal variation. Toner’s voice shows good variation throughout, with strong, unrelenting growls. There are a few softer moments in the album, but the biggest relief comes in the form of the three instrumentals - the opening, Plague Hunters in the middle, with the final track leading us out.

Overall, the album is well put together. Although I would question the inclusion of Lady of the Snows lyrically, structurally it makes sense for the album’s sound. While available to stream on Spotify, I would highly recommend supporting the artist by buying the CD.

Favorite tracks: Favorite tracks include Evil’s Bane for the balance of choral, growls, and symphonic elements, with The Virtuous Quest a close second for similar reasons.