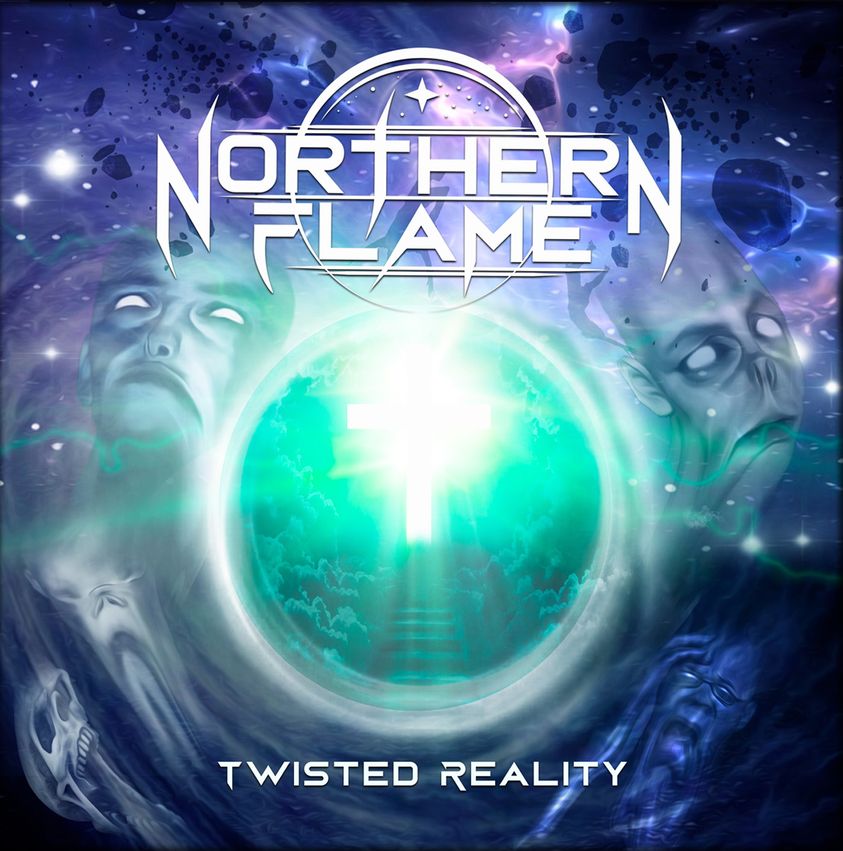 Northern Flame is a melodic metal band from Finland. They have released two demos in 2013 and 2015, and then a full length called a Glimpse of Hope in 2014. That was a very good album by any means. So if this is the first time you have heard of Northern Flame, check out that album immediately, you won't be disappointed. After that, you can listen to the new full-length Twisted Reality. Most of the members are also involved in the melodic death metal band Hilastherion, Niclas also has a melodic black metal project with the name Parakletos. And between those projects also a band called In Divina, female-fronted metal, also a recommendation. And his guest appearance in Jernlov was in my opinion a great match. I think the guys are very proud of this release and I will try to explain why I think that.

The album Twisted Reality starts off with the epic and somewhat majestic instrumental song Twisted Reality. It's evidence of good musicianship because with a duration of more than 3 minutes it's, in my opinion, a great thing to start with.

The second song is called Sanctification of the World, a nice follow-up. Lovely track with a fairly fast tempo. What is also striking is that the singer Simon Granlund is not afraid to sing high notes. Daring and very well executed, I had to get used to it but I like it very much after a few listens.

To the Throne is the third song on this album. It has a somewhat more calm atmosphere on it. The vocals are more middle ranged, also there is much room for a good solo and those galloping guitar loops... Very well done.

Then we have Shimmering Solstice, it's a kind of ballad between Simon and Emma Backman, who was the lead vocalist of In Divinia, but she does also guest vocals on the Parakletos latest EP. I like this song very much, they are both doing a perfect job.

Glowing Flower is the fifth track on this album, All I can say of this song that it's almost perfect. I think one of the best tracks on this album without a doubt. All of the instruments are very good hearable thanks to the good production. Those shredding guitars and keyboards on the background and not forget to mention those perfectly executed vocals. Again there is much room for a good keyboard solo.

Broken Soul then starts off. This song contains a calm and nice piano and acoustic guitar intro. It builds up into the moment when the guitars get in. What is also different on this song is that Niclas contributes harsh vocals.

Stone of Grace is a very uptempo song with a good and catchy chorus. Again the vocals are pretty much high pitched. He must be proud of this it adds really something new to the sound of Northern Flame. Love the end of the song really epic ending.

Fuel My Heart is a really emotional song, a cry out to God to reach out to us. To Fuel our Heart with his Holy Spirit and fire. It also contains the best guitar solo on this album.

Heaven & Hell, man what I have to say? It starts off with a piano-driven intro. It somewhat reminds me of a musical setting or something a battle between good and evil. The variety on this album is absolutely a highlight. Possibly this track is the best example of that. The song builds up to a kind of climax in the second minute of the song, a transition to a section with a fairly fast tempo.

Starfall on a Cold Winter's Night is a moment of some epic guitar and keyboard playing, but also the drums shine, those variations in tempo are not easy to execute. It's an instrumental song and it provides a transition to the end part of this album which is over an hour long. Beautiful is a hymn to praise the most beautiful women in the world. I have to admit, I really love this song. And also lyrical wise! it is daring and our metal hearts also need every now and then to reflect on how beautiful a woman and in particular our wife really is.

Paradise is the last song on this album, it starts off with the sound of a church organ. It sounds familiar to me but I could be wrong. Soon the church organs are exchanged for heavy and majestic guitar riffs. Again they are able to sound a bit different on this song, some haunting passages also included. Around the fifth minute in the song we have a kind of oriental sounding solo, I think the best instrumental passage on this album. With the duration of 8 minutes, it's also the longest track, and a majestic one to end this amazing album!

And we all see Jesus, we will sing and shout in victory, Amen!

Reason: The variety and the duration of this album is really a true highlight. Very much good songs to enjoy. And the production is a big step up! And let's not forget the musicians did an amazing job. Kiitos Northern Flame!