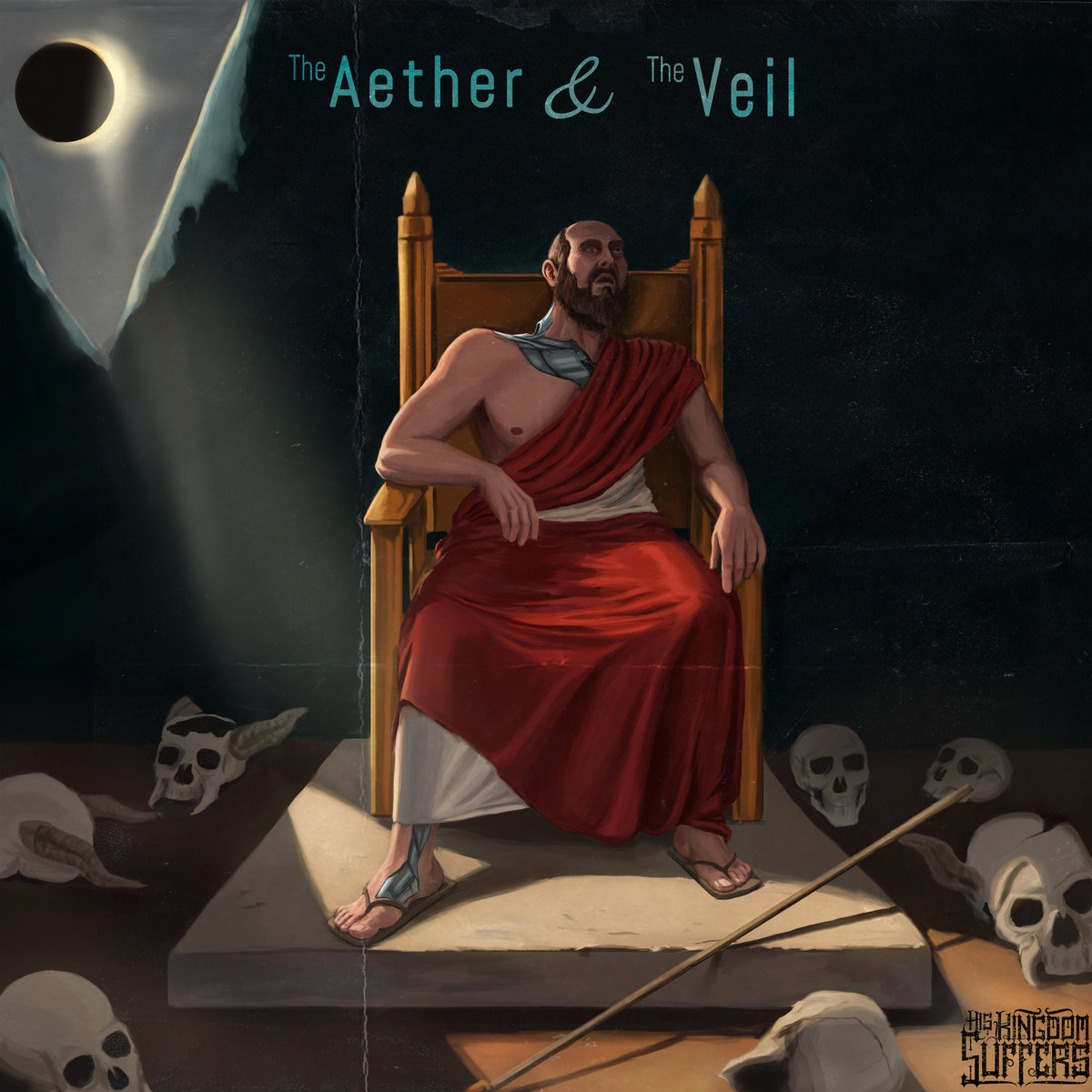 A little while back I was asked to write a review for His Kingdom Suffers latest single Spiritual Warfare. I was a big fan of the song and commented on how much I was looking forward to hearing more material. Well, I didn’t have to wait very long. Andrew Harrison, the sole member, and brainchild behind the band remastered his older material and re-released The Aether & The Veil. The release contains 12 remastered songs, two new tracks (one instrumental and the aforementioned Spiritual Warfare) as well as all the instrumental versions of the songs. For this review, I’ll be looking at the remastered songs. So does this re-release live up to the single? Let’s find out.

So let me get my main (only?) complaint out of the way at the start. This is a long album with long songs. The songs average 5 plus minutes. I will admit that on my first listen it didn’t really strike me, but when you sit down to listen more intensely for a review and have a notoriously short attention span, you feel the length. All that said, outside of a couple of moments, this album wastes no time. It opens fast and doesn’t let up.

Intense. I feel as though I could just write that one word and leave my analysis of the music at that. Not much of a review there so let me delve a bit deeper. The Aether opens us up sounding a bit like Impending Doom. It may just be the genre, but the Doom sound weaves in and out on this album. Please don’t read that to mean that His Kingdom Suffers is some sort of clone as Andrew is bringing a lot of himself to this. Indoctrination Stations just throws the gates open and he lets loose with everything. The drumming is easily one of the biggest standouts. You could be lead to believe that a robot drummer was used. Andrew is a machine; his use of a double bass creates such a machine gun sounding wall of noise. If you still have doubts, go check out his video for Spiritual Warfare to see him performing. This avoids the trap of boring repetitive deathcore cliche by mixing in all sorts of other elements, perhaps turning this into a progressive technical death(core) album? Oh, how I love genre labels.

There is liberal use of sound clips throughout the album, Indoctrination Stations, Propaganda in the House of God, and Made in His Image all begin with clips, almost the whole of Revolt is presented as a cinematic piece and Revival has several recordings of Preachers. Beyond this, musically some unusual moments are quite unexpected. Propaganda in the House of God gives us a guitar solo. I was pleased with how well it was incorporated, as it’s a musical choice I usually end up cringing at. It’s handled so well that it fits nicely when we get a blisteringly fast solo to launch Approaching the End of Days. There’s also a dash of strings sprinkled into the song. Psalm 2 brings some soaring keyboards that would easily find a home in a melodic metal piece. Kingdom Born opens and intermingles some 80s style metal (most likely due to the guest vocalist). One of the most interesting things that you notice when really digging into this album is that Andrew often calls back to earlier parts of the song. Psalms 2 and Approaching are particularly noticeable occurrences, moving into really heavy parts after introducing newer elements, but eventually coming back and blending in those elements towards the end of the song. Coming back to my complaint about the length of songs, I do find that the outros to many of the songs tend to drag a little long, but that is probably just due to my not being a huge fan of instrumentals. Also, I would love to have liner notes that tell me where all the various sound clips were taken from.

Besides the drums, it’s the vocals that really shine here. In my previous review, I’d commented that I was sure that there were multiple vocalists. I was wrong and that just blows my mind. The interweaving of so many different types of vocals so seamlessly is baffling. He can shift from pig squeals to gutturals, take a breath, and end with inhales. Did I mention the black metal like highs? How about the fact that there’s a clear tonal difference even within each style? In a few places, Black Screen, there’s a back and forth interplay of the styles. You’ll never be able to say the vocals are monotonous because they’ll change before you feel at all bored. Plus when you think you’ve heard it all there’s a cool whispered chant in Propaganda in the House of God. The strangest moment is when guest vocalist Isak Tamang of Bethelem opens on Kingdom Born. I’m not familiar with the band, but the 80s metal styling is a jarring shift from the rest of the material. The experiment is to be applauded for how it’s pulled together and I assume Andrew got to work with a vocalist he admires, but I do feel it’s a little bit too odd of an inclusion. Listen to the end of The Veil for a young girl speaking in a different language and sounding about as creepy (demonic?) as you’re going to get. Seriously just go listen because I can’t do it justice.

Lyrically, His Kingdom Suffers is about as hard-hitting as I’ve heard in a long time. There are moments that I felt like he was bluntly saying things I’ve often wanted to say myself. For example his takedown of the religion of science and its prophets Dawkins and Hawkins as well as his scathing critique of how people take in questionable knowledge “If you’d stop watching biased YouTube videos and memes you’d learn something” (Indoctrination Stations). Black Screen points out societies mindless worship of television and media while Propaganda in the House of God roasts the prosperity gospel “prosperity preaching has its ties with the Devil himself”.

There are a couple of times that I do question some of his critiques. Made in His Image is an attack on transhumanism, which I’d agree with, but the benefits in the advancements in medical technology cause me to balk at how forcefully he attacks the idea of technology. Also, The Aether’s questioning of the prideful misuse of high education (I assume theological in nature) makes sense but also lacks a touch of nuance. I admit that those are potentially my own issues and frankly asking for nuance from a deathcore band might be inherently silly. Kingdom Born, Approaching the Ancient of Days and Revival are all counterpoints to his blatant takedowns, choosing to emphasize our relationship to God and our need for Jesus our redeemer. There’s a nice balance of exhortation and critique. Speaking to my earlier comment about how Andrew calls back to previous sounds, The Veil serves as a bookend to The Aether, tying all the themes back up again (kind of makes sense when you think about the title of the album).

This review simply can’t do justice to just how good this is. I would love to see how Andrew would handle performing this live. The technicality goes above and beyond the average deathcore; the experimentation keeps it from becoming monotonous and really plays to finding new things with each listen. The vocals, what more can I say about the vocals? I’m a big fan of the fact that outside of the guest spot there wasn’t an attempt to cater to the current need to throw cleans(regular singing) all over a heavy album. Lyrically this is a balance between critiquing modern church and society while still pointing to the love and redeeming God and Son. All set to relentless drumming!