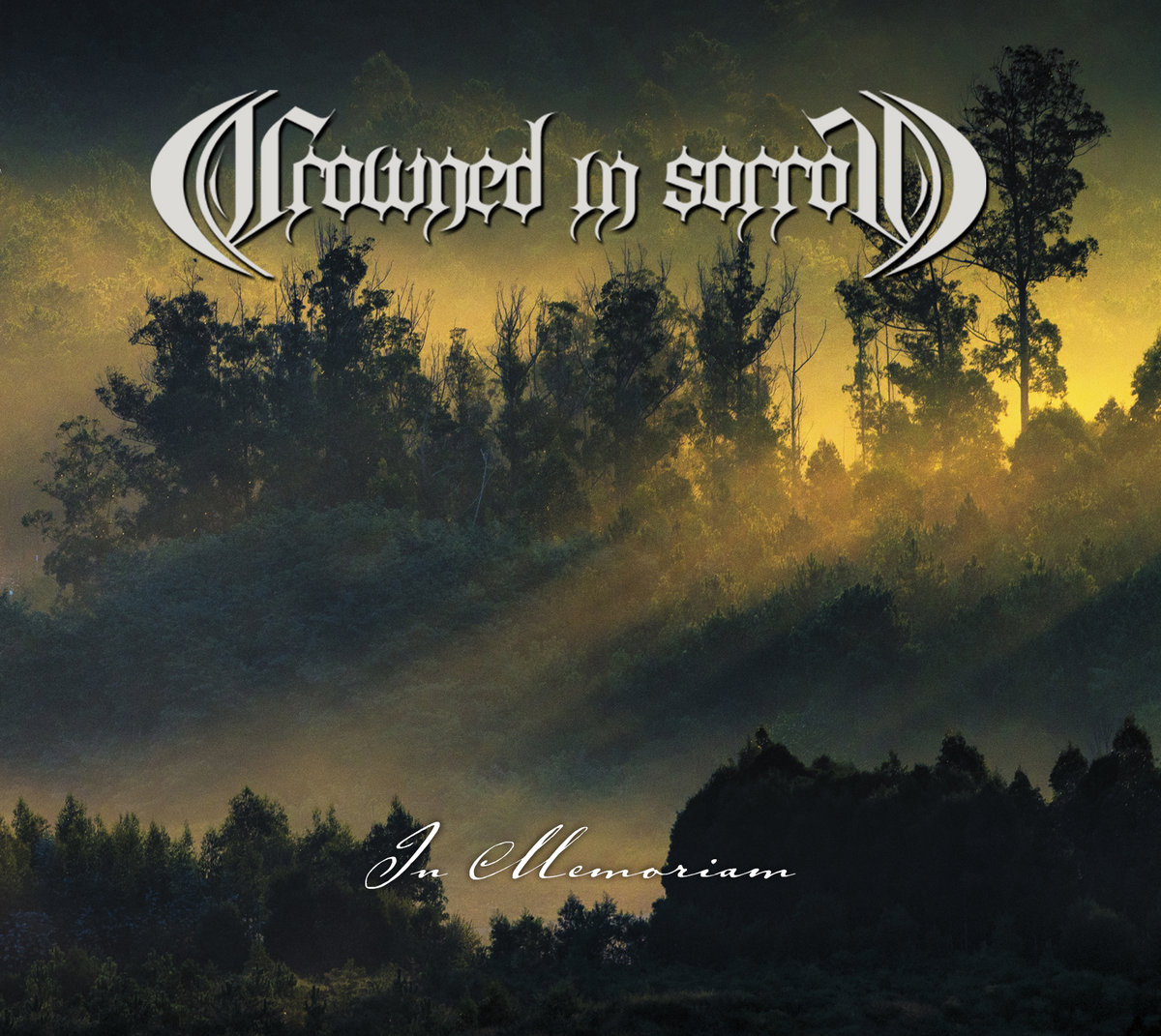 Derek Corzine, of Corzine Studio (opens new window), otherwise known for this work associated with Blood Thirsty, Cosyns, Whisper From Heaven, and Syringe, hits the mark with his recently released solo project In Memoriam under the band name Crowned in Sorrow. Corzine identified this as his most personal work lyrically to date, dealing with loss and grief. The album finds rest in the comfort of life after death through faith in Jesus Christ. However, this is anything but a restful album, with an incredible amount of talent displayed by Corzine as he handles the drums, bass, mandolin, piano, keys, and the dominant clean/distorted vocals. A number of guest vocalists make an appearance as detailed below:

Lyrically, to title an album as such clearly indicates the direction and content. Corzine is no stranger to loss, losing both his sister and his father. The track ‘Blue to Gray’ deals with the loss of his father, and the line "I remember the sky that day/How it changed from blue to gray" when growled by Corzine will resonate with those who have lost someone close. Other tracks such as ‘Only Memories’ deal with the pain of addiction, yet the line ''Disbelief overtakes me/As I pick up the phone'' rings universal for all those who have felt the absence of a familiar voice once previously available.

Sonically, Corzine is clearly gifted given the output of this album. The gentle downcast, yet slightly uplifting and hopeful opening tones of the first track ‘Far Beyond Death’ soon delve into the heavier, slow distortion characteristic of the doom genre. This foreshadows the remainder of the album. Corzine never lets us settle too deep into despair, reducing us with drawn-out guitar wails reminiscent of the late nineties collaboration between Everlast and Santana. ‘Remembrance’ marks the midpoint of the album and was produced to honor Corzine’s sister after her passing in 2016. The instrumental both relieves and builds tension, before releasing us back into the depths, rescuing us once again as the piano version of ‘Remembrance’ is placed as the closing track.

Overall, a solid album that deserves to be treated as a performance rather than music for the sake of a background accompaniment. Deserving of a quiet room at dusk watching the evening fall, soaking in everything In Memoriam has to offer. Despite the seemingly lengthy tracks identified on paper, the album feels well balanced and flows evenly from start to finish.

Favorite tracks: ‘Ashes’ for the lilting vocals Courtney Johnson brings to offset the undercurrent of melodic strings and contrasting guttural growls from Corzine; ‘Blue to Gray’ for the diversity represented, and how the vocals penetrate and reach that point of grief.

There’s so much to say about this album. It was a very pleasant and also a very emotional experience to write a review about this phenomenal album. After I listened to the album, a few bands came to mind to compare with this project. Swallow the Sun from Finland and also the earlier Scar Symmetry. Derek’s deep grunting vocals are similar to the vocalist of Swallow the Sun and most of the clean vocals sounded a bit like Christian Alvestam of Scar Symmetry. But Crowned In Sorrow is not a copy cat of this band. In tempo, I think it's closer to Swallow the Sun because Scar Symmetry is melodic death metal with mostly a high tempo. But there is also a difference in the lyrics because through the lyrics about grief, loss, and even despair there is hope shining through in the person of Jesus Christ, the first song has a very great lyrical passage where the faith of Derek is coming through:

"Far beyond the reach of death,

There is a place of pure life only

Only to be found

Through faith in Jesus Christ" - Far Beyond Death

Maybe I am a little overreacting, but I loved this song from the moment I heard it. It starts with an acoustic and calm passage, which we also hear in the music of DC Mills (Vials of Wrath). I don’t think it's a coincidence that he did the high screams later in the song. This song is beautifully constructed. In minute 2, there is a beautiful melody that may be inspired by the riffs that Insomnium often produces. And it's great to hear those riffs quite a few times throughout this song. The clean vocals also have an important role in this track and they’re amazing! In the outro, we also hear the piano coming through.

"Ending It All" is the second song on the album. This song has a more progressive sound than melodic, I think mainly because of the change in tempo and bass lines. The grunting vocals are even lower than on the opening song. And the clean vocals come in again smoothly. It has a kind of Roots of Tragedy vibe on it, and actually, that's not a bad thing.

The build-up is great in this track, the song slowly takes on a more brutal sound, around minute 2. The song ends with a spotless-sounding guitar solo.

"Slipping Away" is the third song on the album. Soon we hear a familiar riff, I think it was taken from a song of Whispers from Heaven. That was a gothic doom project of Derek Corzine. It's an excellent riff. What a wonderful ode is this track to the doom/death metal genre, slow and extremely heavy riffs, incredibly low grunts, and drums that hold back the tempo a bit, it even includes an acoustic passage. Well, what I have to say further? Oh wait, some very aggressive high-pitched screams to add to it.

"Ashes" begins calmly with a nice bass line, and then a cello comes into the fray. I was very surprised to hear the voice of a woman; I didn't see this coming. She has a pretty good voice, and this is a nice resting moment in this album where there is room for beautiful musical interludes, acoustic guitar, and certainly also the bass and a nice voice. Around minute 4 there is a pretty rough passage, which reminds me a lot of Paramecium.

"Remembrance" is an instrumental song, a beautiful piano interlude with a heavy guitar riff coming through to start a transition to the next track on the album.

"Blue to Gray" also starts with the piano but much darker. The tempo in this track is higher, and soon we hear slightly ominous clean vocals. You are drawn to the various transitions in this track. At times and late, it also feels majestic by adding choral vocals. The epic part is a bit like what Hope for the Dying always brings into their songs so beautifully.

"Only Memories" starts with one of the nicest piano lines I have heard in recent times. Such emotional dark tunes, and soon there comes some of the most brutal riffs coming in this album. Soon we hear the nice clean vocals again, very tenor-like. This song reminds me very much of Swallow the Sun, but Derek sounds more progressive or even a bit djenty because of those breakdown-like passages coming through. The piano continues to play an important role in this track, again we hear a beautiful guitar solo coming in. There is so much variation to be heard that it will never get boring.

At the end of the song, even some bells are coming through after some very low grunting vocals!

Now it's time for "We Carried Your Body", its also time for the guest role of Luke Renno from the death metal band Crimson Thorn, you can hear it about minute 5. Man, what a song and what an epic grunt he has. It's by far the most brutal track on the song, not only because of the vocals but also instrumental-wise. We can hear again some very nice tempo changes in here. We take a breath through an acoustic passage, then comes one of the most beautiful endings of songs on the entire album. What a great musician he is! The beautiful sound, heavy but in a way very sweet sounding.

"Eternity Upon Your Grave" was the first song he has released. this track will never get boring, the dreamy clean vocals, perhaps a bit or something inspired by the singer of Katatonia, the transition to the heavier work. Phenomenal. An album cannot end better than this track, not even mentioning the screams that come in between, as if all genres that Derek loves are brought together in one track. The beautiful change of tempo and also a change of tone around minute 4, where the screams come even more to the fore. What else do I have to say about this track? I end with the words, how grateful we can be that there are artists like Crowned in Sorrow who know how to use their talents to the maximum.

The outro, a beautiful piano version of "Remembrance", a great way to think back to what we were presented with. A beautiful album has become In Memoriam.

Reason: It’s almost perfect. If you like bands like Paramecium, Roots of Tragedy and I also hear some Hope for the Dying coming through, because of the epic and orchestral elements, then you will love this. I would also add some secular bands like Swallow the Sun, Insomnium, or Scar Symmetry to the list, the last one because of the clean vocals inspired by Christian Alvestam.

Personal side note: I want to share something very personal. Just before I wrote this review on Thursday[4th February]. My wife gave birth to a child, but he or she died around the 11th week. This album will be also kind of In Memoriam for me. On Tuesday[2nd February] she got the news that the child did not have a heartbeat. It is kind of taboo to mention something about this, but we may and must also bring this to the Lord, the life that was given by Him was unfortunately brought to a stop by nature that intervened because something was wrong with the development of the child. We will never know, but all that I ask for is to pray for us but also for all the women and families who also had to go through this.