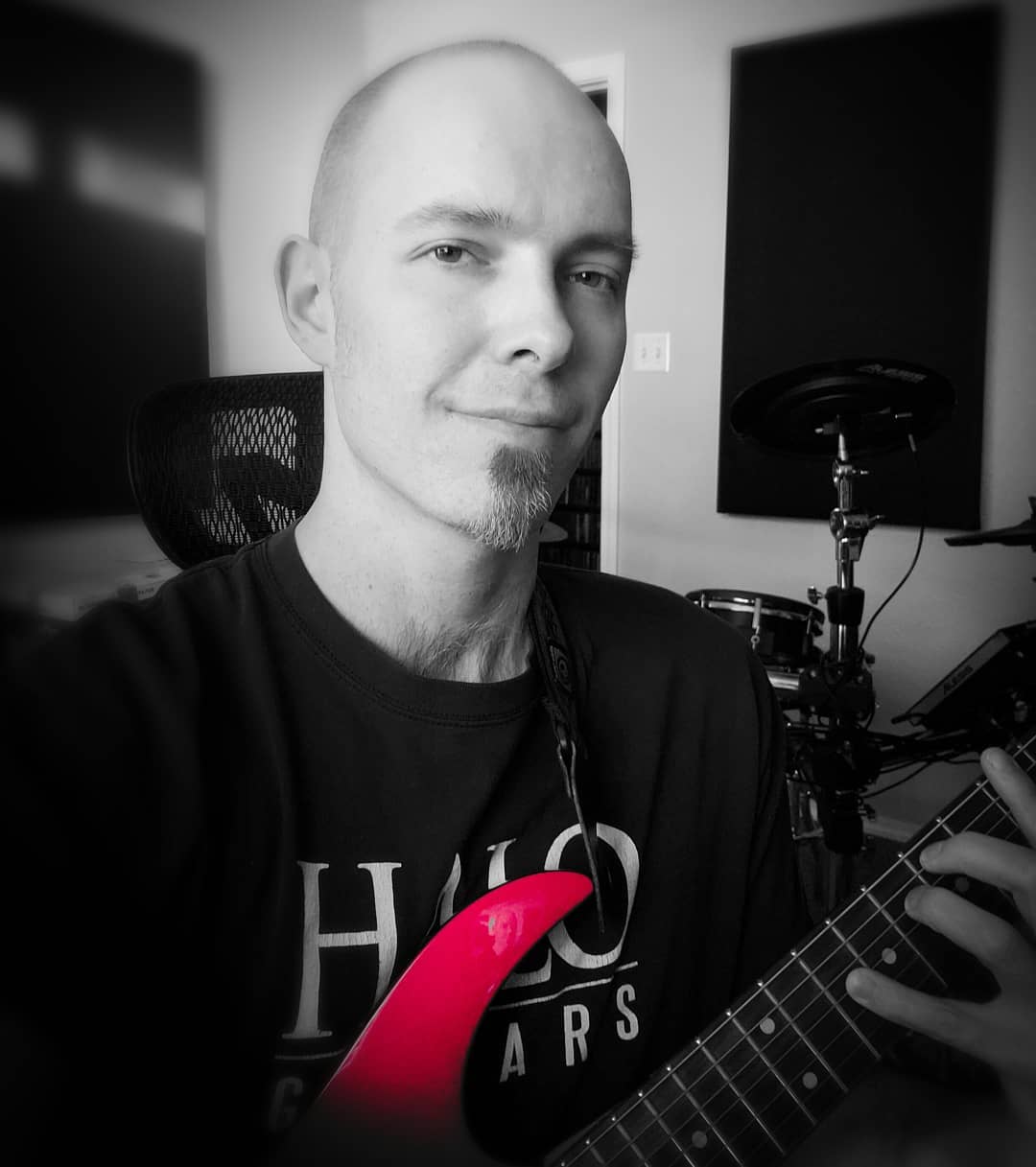 What's the significance of the name Crowned in Sorrow?

Derek: The name represents what the project is about which is dealing with death, loss, and grief which speaks a lot about my life when I began to move forward with this.

How was the writing and recording process for In Memoriam? You've stated that you revamped old songs. How did that work?

Derek: Yes, the majority of 3 of the songs were written as far back as 2003 or 2004 when I originally had a vision to create a doom metal project. Those early songs would get demoed out as part of Whisper from Heaven with female vocals, but then the songwriting completely shifted to suit that vocal style. We only ever officially directly released a single song. I really wanted to revisit those old songs since they began as doom metal, so I reworked them a bit to fit my vision for Crowned in Sorrow. For this project, I would usually start out with some kind of musical theme and build the entire song around it. During the instrumental recording sessions, I would start to write lyrics little by little and analyze the best placement for them in order to best match the emotions of the music with the words.

What were some of your biggest obstacles when writing the album?

Derek: The absolute biggest obstacle was my emotions. Since these songs are very personal to events in my life, it was emotionally draining to begin writing even a few lines. I had to constantly take a step back and ground myself in the Lord and in my head in order to continue my daily life without getting sucked into a deep depression.

Being a music producer, how does that affect how you make music?

Derek: When I write music, I have a vision of what I want to achieve as far as the sound and song structures and I know what it takes to turn what's in my head into reality. Since I run my own studio, I have immediate access to record any idea into a finished part as soon as my schedule allows it. Before I started doing audio production, I would write and memorize entire songs whereas now, as a solo artist, I can record them and move on to the next idea...and I have WAY too many ideas! Haha!

What do you think classifies as a good mix and master? Where is it best for every instrument to sit in a mix?

Derek: Technically speaking, what classifies as a good mix and master is something that isn't fatiguing to listen to, all the important pieces are heard, and it sits great alongside other professional recordings. As far as the end result, it comes down to the listener and what grabs and holds their attention throughout an entire song, EP, or full-length album. I like to be able to hear everything in the mix which means I have to carve out frequencies on every instrument and vocal to make sure the different elements all have their place in the mix and are in focus when needed. A lot of this will come down to songwriting to make sure that the music doesn't get cluttered and supports the important elements in any given part of a song. For instance, if I want a particularly memorable vocal melody chorus, I have to make sure the instrumentation underneath will support it as a foundation and not get in the way.

As a multi-instrumentalist, what your favorite & least favorite instrument to record?

What do you think sets In Memoriam apart from the rest of your discography?

Derek: The two things that really sets this release apart is the songwriting and production. I'm constantly growing as a songwriter and as an audio engineer and I believe this release shows a lot of maturity in those areas. Not only that, but the lyrics are so deeply personal to me instead of writing lyrics around sermons I've heard or based off of passages in the Bible.

Who were your major musical influences for this record? I’ve heard many comparisons to Opeth and I hear a bit of 7 Horns 7 Eyes

Derek: The main influences for this project are Swallow the Sun, Schaliach, Paramaecium, Extol, Godgory, Shape of Despair, Red Moon Architect, and Opeth...with a little bit of Dream Theater and Meshuggah thrown in.

Now that the album is out, what's next for Crowned in Sorrow? What this meant to be a one-off album, or will there be a subsequent album continuing this theme?

Derek: I'm working out ideas for the next Crowned in Sorrow release, making little recordings of riffs, ideas, and themes. This was meant to be a serious project and has been received much better than I ever anticipated, so this just may well become my main project from now on.

What are some of your favorite bands in the Christian metal scene?

As a follow-up, what are some recent albums you've particularly enjoyed?

Derek: I have been really enjoying the new Pantokrator and Dalit which are both on repeat for me.

On a couple of Blood Thirsty songs, you had the assistance of a pastor. Tell us more about that.

Derek: The pastor mentioned is my best friend, James Rich, who started Blood Thirsty with me back in 1995. He's the guy that got me into extreme metal. He will come up with some bass lines here and there and I'll build them into some type of song structure in one way or another. Other than that, all the lyrics for Blood Thirsty were inspired by various sermons I've heard from different pastors.

How did you become a believer? Were you raised in a Christian home?

Derek: Yes, I was raised in a Christian home, but I didn't fully understand or accept Christ until I was in 7th grade after I was invited to attend a local church youth group. I remember one night at home, this overwhelming urging sense of the Holy Spirit came over me and I asked Jesus into my life at that time.

What are some of your favorite books of the Bible, and why?

Derek: I think my favorite book might be Daniel. I really like the story of Shadrach, Meshach, and Abednego and how they would not bow down to a false idol, ultimately being thrown into a fiery furnace, to come out unscathed...and in turn, the king, Nebuchadnezzar, came to honor God after witnessing such a miracle.

What’s next for you, are you currently working on another project?

Derek: I've been rather busy in the studio working on mixes and session work for other artists. But I have been working on a collaboration with other musicians, that is starting to come together slowly. I'm sure a big reason it's going slow is because of how busy I am! Once that starts progressing further, we'll begin making everything known. I've also been going through ideas for a new technical death metal project where I'm using only fretless guitar and fretless bass. I'm also in the planning phase for the next Blood Thirsty album which will be insanely epic and super brutal. There is also other songs written for another project that I had a couple of demos for several years back that got indefinitely put on the backburner, so I'm planning on working on that one in 2022. It's kinda spacey progressive metal. I've said this to many people, but one of my problems is that I have too many ideas and never enough time!

What’s the best way fans can support your musical endeavors?

Derek: The best way to support the music is by visiting the bandcamp sites at Crowned In Sorrow (opens new window) and Blood Thirsty (opens new window). They are also on iTunes, Amazon, Spotify, and all major digital retailers. I'm working on a website for my audio production that will also serve as a home for those projects.

Derek: Thank you so much for all the support! God is doing amazing things and I certainly hope to continue to make music that touches the lives of both believers and non-believers alike.

Read our review of In Memoriam here (opens new window).