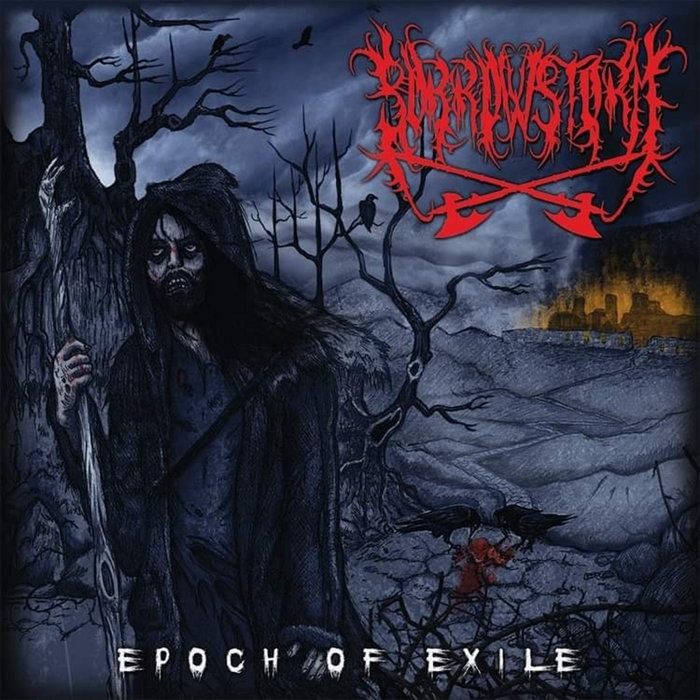 Who should listen: Fans of Antestor, Frost Like Ashes and Horde

Sorrowstorm is back from a self-imposed exile! 13 years after his last album dropped (opens new window), Sorrowstorm, (Felipe Diez), has come out of retirement, shredded out the rust from his joints, and has released a 5-song EP that puts to rest all fears of 13-year-gap-induced mediocre music. From tight rhythms to spot-on vocals, to frenetic-yet-controlled drumming, to deep biblically-based lyrics — Sorrowstorm’s Epoch of Exile has it all. With his classic-sounding black metal vocal stylings and creative guitar progressions, Sorrowstorm consistently nails it from start to finish, from top to bottom.

Epoch of Exile starts out fairly tame. It’s like Sorrowstorm is warming up his instruments before he really cuts loose. We are eased into the album before Sorrowstorm goes into full black metal mode. With a flurry of drumming and mad strumming of guitars, Sorrowstorm screams biblical prophecies straight out of Amos, Jeremiah, and more. Amos? Who draws metal inspiration from the shepherd of Tekoa? Sorrowstorm does! And with great effect. Later on, we are treated to God’s questioning of Job, and we are challenged to acknowledge the sovereignty of God over all things.

As the album progresses, the frenetic beats abate, return, recede, and morph back into existence. This gives the listener a break and keeps the music from becoming stale and monotonous. A smart move on Sorrowstorm’s part in order to avoid repetitive-sounding music. The variation throughout the album also showcases Sorrowstorm’s musical talents. These musical talents combine with the lyrics to create thoughtful, biblically-inspired music that edifies as well as causing us to get up and headbang.

Not letting himself get into a rut, Sorrowstorm continues to mix things up throughout the whole album, switching from classic black metal riffage to more fluid guitar tones, to some soaring sounds. Rhythm and vocal changes keep listeners on their toes and bouncing along throughout each track. Even when the lyrics aren’t straight out of the Bible, they remain on solid theological footing. Tracks 3 and 4 are about being trapped in sin and despair and how Jesus rescues us from the maze of endless night. Though we still suffer in this sin-scarred world, we look forward — along with creation itself! — to the renewal of all things after Jesus returns.

The final two tracks of this EP are reworked versions of older songs. While preserving the classic black metal sound, Sorrowstorm has spiced up these tracks with some flourishes to make them new-old songs set apart from their ancestors. Very melodic in nature, these tracks will get you dancing around your living room while praising God with Sorrowstorm for His forgiveness, salvation, and promise of eternal life.

The last of the reworked songs, Onward, is a classic black metal track broken up by patches of atmospheric-sounding guitars and arpeggios. The closing 45 seconds of this album stand in stark contrast to the first 45 seconds. Whereas we started the album slowly, easing us into it, the close here is a race to the finish only to abruptly be ended.

It really is tough to find any weaknesses in this album. While not perfect, most things that a listener might not like are a result of personal preferences rather than any flaws in the musicianship or production.

There is much to like about Epoch of Exile. One of the best things is the vocals. Guttural but still black, Sorrowstorm has really good pronunciation, such that a listener can actually hear what he’s saying. There is next to no vocal distortion, which allows the vocals to shine forth.

The drumming is tight throughout. There is variation in speed and style, but the drums are a true accompaniment of the music. They don’t take center stage or draw attention but drive the music forward as they should. So too the guitars, varied as they are, fit well into the whole musical package. This results in balanced, well-produced music that is cohesive and allows the listener to be drawn into the music. Never is it grating or jarring, but rhythmic and melodic in its own way.

Because the vocals and music complement each other so well, the listener can also focus on the lyrics. When one does, you realize that not only are the lyrics biblically sound, but they are very hopeful indeed — surprising when one considers the name of the band. Yes, there is sorrow over sin, but yes — praise Jesus, yes! — there is that resurrection hope that we all so desperately need.

Though Sorrowstorm retired from music 13 years ago, it is clear that he hasn’t missed a step. I wonder what his music would be like today if he hadn’t had that long of a retirement, but perhaps it is because of the decade off that his music today sounds so fresh and alive. Whatever happened during that gap between albums, the result as heard in Epoch of Exile is a good one. Do yourself a favor and listen to Epoch of Exile!

Favorite Track: Onward: Though the songs on this album are all pretty evenly matched, Onward edges out the other four tracks for the title of best track. I really can’t say enough good things about the last 45 seconds of that track. What a finish to the album!