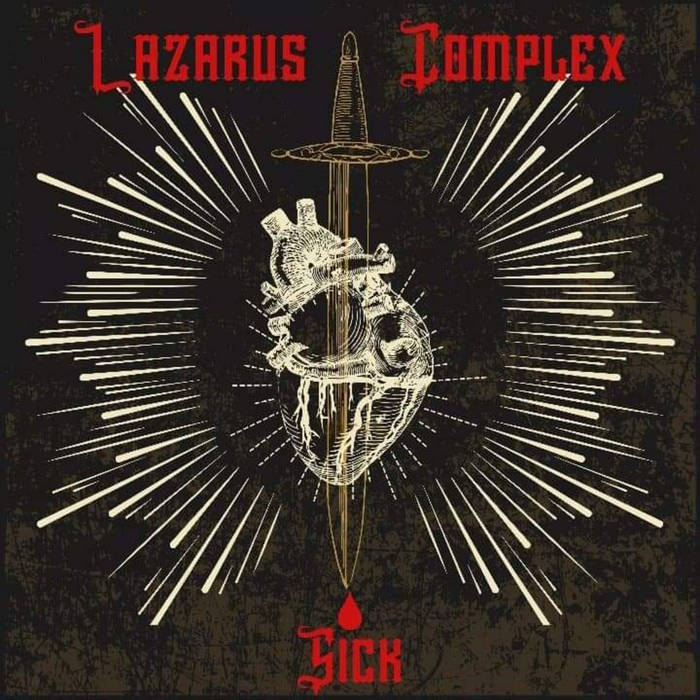 As I sit down to write the review for Lazarus Complex’s Burn I have to admit that it’s been a strange journey with this album. I heard the first single and immediately fell in love. I jumped at the chance to be the one to review it. Then I sat down with pen and paper to take notes and had no idea what to say. I liked what I was hearing but I felt like I just wasn’t getting it, I couldn’t figure out how to approach it. So I decided to just put it on and stop thinking. It finally clicked, so here we go.

Lazarus Complex is a two-man deathcore band signed to The Charon Collective (opens new window). Now I say deathcore but that particular label comes with a fair amount of baggage. We’re not looking at a straight-ahead chugging band that moves from breakdown to breakdown so let’s put that stereotype to bed right away. I mean they can do that, but it’s more of a base that they build the rest of what they are doing on.

The album starts with an intro track that sets a melancholic tone, starting with a slow tapping of notes which then adds layers of sound including distant talking that grows louder and louder till it drops back out to just the tapping again. There’s a tension being built and you start to wonder where it’s going to go. The first full song, Burn, answers that question pretty quickly. The sound of a match lighting and then BAM we’re off. Now here is where I’m going to touch on some of what was throwing me off and made writing this review a bit difficult. It’s hard to find anyone thing that particularly stands out, that one thing that you latch onto. Now I realize that may sound negative but stick with me here. Lazarus Complex has a sound that blends all the instruments in an amazing mix. The drums are driving and steady setting a solid pace. There are some clear inspirations; Burn throws some rapid-fire deathcore cymbal use and Crooked Man hammers you with some good old-fashioned death metal blast beats. The guitar work here is what sets them apart from the generic deathcore pack. Again they know how to bring the chug, but they play with tempo changes, Daughter of Eve has several start and stop moments and moves from a fast grind to a slow chug. Add in some sweeps and some hints that a solo might pop up and you get the most interesting song on the album. Flash forward to Sick and you get the solo. These guys aren’t afraid to experiment with their sound as well. Burn’s opening match, Crooked Man having an internet dial-up squeal, and the police dispatch clips in Caylee’s Law add immensely to each. Then there’s the use of atmospheric layering on Sick and keyboard on Swan Song that further set the emotional tone to what they are conveying. Did I mention they play around with genres? Remember You Will All Die has an almost country-sounding bounce to it with an intro that makes me feel like I’m riding a horse through the old west like in a Clint Eastwood movie. Reconcile blends all kinds of elements, looking at my notes for the song I’ve got melodic death, thrash, and classic metal written down. So again, they are not content to just give you a paint-by-numbers deathcore album. My one complaint is the low-end mixing for the first few songs. The bass just doesn’t have the punch that I would have wanted and there are a couple of bass drops that don’t hit as hard. Now when we get to Daughter of Eve and for the most part moving forward on the album this no longer seems to be an issue.

The vocal performance on this is awesome. At its base, it’s a slightly higher pitched raspy delivery but he has no problems dropping into a low breakdown-friendly guttural, Daughters of Eve, or a faster-paced scream, Burn. At times there’s a high straining black metal sound while other times the vocals could easily fit on an old-school thrash album. There is some wonderful layering of voices throughout the album, Seventh Sin and Swan Song for example, that fills the sound out perfectly. Even here they experiment a little tossing in the very occasional cleans, the chanted “death” from Remember You Will Die, and a cool call response chorus delivery on Seventh Sin. Some of the vocal experiments are a bit distracting and could use a little more polish but it’s fun to hear the attempt and I hope they keep trying them.

Lyrically this is a dark album. This shouldn’t come as too much of a surprise considering the ominous intro track, the brooding interlude, and the fact that there is a song that has “death” being sung/chanted the whole way through. Much of the album deals with embracing sin and the consequences of that. Moving from Burn to Caylee’s Law there’s an underlying narration of being hurt, dealing with and giving in to temptation, even despite warnings, and then being hit with a song about child abuse (in my opinion, one of the worst things I can think of). Reconcile and Swan Song are the tension-releasing songs off the album. The former acknowledges sin and struggle and offers hope if we reach out while the former reminds us that this world is not our home. This is meant to be an encouragement in that no matter how tough things are in the here and now; we have an end that we can look forward to! This dark tone is pretty common to heavier Christian music now and I’m pretty thrilled about it. When so much of the CCM market is designed to make people feel good, the heavier side spends time looking at real issues and struggles, acknowledging life’s problems instead of sugar coating things. Thankfully, once again here we aren’t left in that darkness but instead are shown there is hope and light.

Lazarus Complex is a great listen. The difficulty I had was trying to dig deep and overanalyze. Trying to find all the subtle nuances and deeper layers. In all honesty, there are layers but this band is meant to be turned on, cranked up loud, and just enjoyed for the heaviness they bring. A deathcore band that is willing to mix genres, play around with different sounds and experiment with sounds instead of resting on their laurels. They choose to honestly explore life’s struggles in their lyrics and yet still maintain hopefulness. I’ve greatly enjoyed my time with this album and it will become a part of my regular rotation. Now please get back in the studio cause I’d like more!