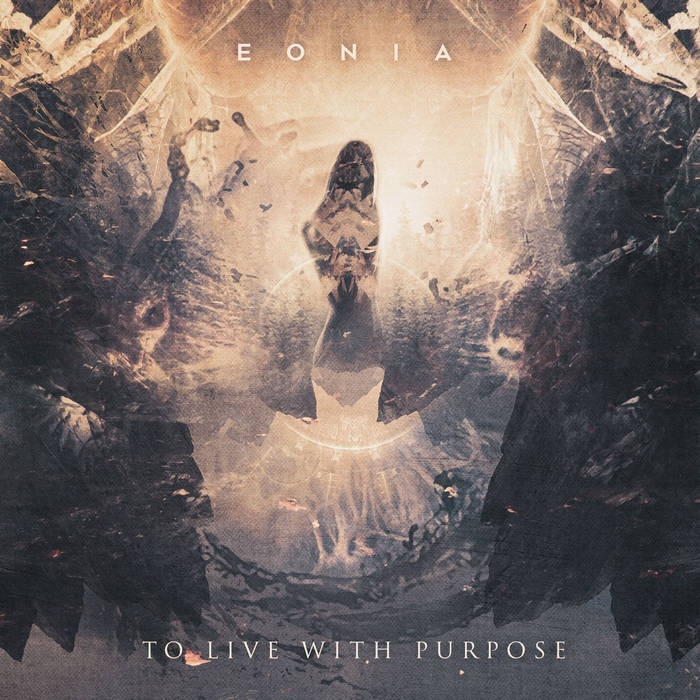 Who should listen: For fans of Erra, Elitist, August Burns Red, For The Fallen Dreams, Misery Signals, The Ghost Inside, I The Breather

Derived from the Greek word for eternal, Eonia, though a relatively new band, demonstrates with this album that they have what it takes to make music that lasts. With a sound that echoes the past, Eonia puts a fresh face on their music to bridge old and new, classic and contemporary. In short, Eonia’s To Live With Purpose is a solid album that deserves numerous spins in your musical rotation.

From the moment I heard the vox, I was transported back in time a couple of decades. The vocals sound like those we commonly heard in the late 90s and early 00s. The vocals have that shrieking quality that screams raw passion. Since I don’t frequently hear this style of vox on contemporary albums, I immediately was drawn into the album.

Lyrically, I also was blown away. The lyrics on this album are well crafted. Not every song is poetry, but there are a few that call out to be savored, their subtle flavors oozing out with contemplation and repeated listens.

To Live With Purpose is not properly considered a concept album, but it does revolve around the album title. Each song connects to the title: living with purpose. From hints in the lyrics, I suspect that a close friend’s death (suicide or overdose?) was the catalyst behind the album’s lyrics. This person is memorialized in In Memoriam, which comes after the opening lyrical track Crossroads reminds the listener that abiding in Christ leads to strength for today and hope for tomorrow.

The middle songs all talk about battling addiction:

“Every choice that you make

And every path that you take

Is an echo in eternity

What will you decide today?” (from Paths)

Loss points out something that virtually every one of us knows: It’s tough to keep going in this world. These ‘no-duh’ moments in songs serve as connectors between artist and audience; they understand what we go through; they are real people, too. And finally, in a highly appropriate nod to Scripture, Loss expresses the longing for rest and the hope of eternity that we all have nestled deep down inside of us.

Sonically, To Live With Purpose is a fairly straightforward melodic metal album. It doesn’t stand out as being an epic album with memorable riffs, but it does do a good job of providing a good soundtrack for the album’s themes and poetic lyrics. The music matches well with the lyrics, taking us to soaring highs and chugging lows with soft interludes and staccato rhythms that help bring home the lyrics to the listener’s heart.

Eonia’s To Live With Purpose is a very well thought out album. It’s cohesive. It works. It’s produced well, and it sticks with you. Sure, the music isn’t overly innovative — it’s on the safe, tame side — but it works well with the lyrics. Truly great albums risk something, and the risk that Eonia took here was with the soul-baring lyrics. Even if you have never struggled with any kind of addiction, surely you have struggled with something that repeats and wears you down. Surely you can connect with that deep-seated desire for the redemption of earth that Scripture says is coming.

Life is tough. God heals and gives hope, but still, life is tough. Eonia does well to remind us that God is good amidst the struggles of life, and that thanks to Christ we can live with purpose. Praise God for His faithfulness!

Paths: With biblically-inspired, tight lyrics and vocals, it’s hard not to like this upbeat track. And if it weren’t already good enough, throwing in a Paul Washer sermon gem outro is icing on the cake.